So… Is It Safe To Talk About Valentines Day Yet??? – #yinzerTalk @starwars #starwars

So as a single guy in PIttsburgh, or a single guy anywhere really, I had a pretty eventful Valentines Day season.  Can you call it that?  I guess so… I just did.  I’ll just call it Valentines Day so I don’t have to always be so chronologically liberal about describing it.  I wanted to post this sooner, but a lot of people are literally hostile when you even start a word with the letter “V” during the month of February.  They get anxiously vicious.  Its as if bipolarity comes to the surface as if it were a seasonal allergy.  Seriously, God help you if you ever recommended the movie, “V for Vendetta” with a glass of vino… that might be the last sentence you say for a while… or ever.  The best you can really hope for with people like that, is having your jaw wired shut.  It’s more probable you would meet your demise via vehicular manslaughter.  How ironic they managed to expire you with further V-based alliteration.  I’m feeling that I have found a safe zone now that February is over and March has officially started. SAFE ZONE.

Moving on… because of the very real existence of bitter, BITTER people like those I just referenced above, I found myself being a big time loner through the month of February.  Thats ok though… it seemed the universe was delivering gifts to me, that only a person like me could fully appreciate.  The first of these would be the re-release of Star Wars Episode I: The Phantom Menace, in 3-D.  The first time I saw the commercial for the re-release, my entire family was around.  If you understood my family and the way they egg on my obsession with Star Wars, I was pretty sure they put together a pretty well-planned and obviously well-produced prank, meant to be at my expense.  In hindsight, I should have realized that the people who have recently asked me how to copy and paste in Word, could never pull something like that off.  Nevertheless, I played it cool as though I was surely foiling their devious scheme.  Immediately upon arriving at my house, I sprinted to my laptop, because if there’s one place that could never lie to me… it was the internet.  Here’s what I found:

So to start off my Valentines Day affairs, I immediately bought tickets and went to opening night by myself.  That’s the only way I could truly appreciate it to its fullest without hearing people trash on it with all the same arguments we’ve all already heard, whether we love Star Wars or not.  I don’t care what anybody says, I’m a full-on fan and loved every second of it.  I love them all because they are from a universe I love imagining, from a story I find fascinating, and a part of the franchise that changed the future of film and cinema forever.  The 3-D conversion was well done and in the parts I was hoping they would really bring it, it was… broughten?  They brang it?  Brung it?  Screw it. It was damn good.  If you didn’t see it, who cares?  I did.  That’s all I need.  I highly recommend it though.  I was the first to stand to give it the ovation it deserved.

If you’re still reading this, awesome.  I’m drinking wine and eating Girl Scout Cookies.  That has to count for something right?

So part 2 of my Valentines Day affairs was spurred by a completely unexpected facebook message from one of the coolest dudes I know, Matt Dayka.  Dayka, if you’re reading this, come hang out or lets round up the crew and go to the Meadows since that’s your neck of the woods.  Back to the story… Matt hits me up on facebook and lets me know that he has the hookup at Adidas and they have limited edition Star Wars kicks out.  Specifically, the Vaders.  I light up like a girl who just received her dream ring, from her dream guy, in her dream proposal scenario.  Of course, I play it cool.  “Yo dude!  That’s totally sick man.  Thanks for hitting me up.  I’d love it if you could get a pair put on hold for me.”  Dayka being the man he is, makes it happen and I make the trek to meet him, which was super nice that he was so willing to work with my schedule.  When I met him, not only did he have a pair of the Vader Skylines set aside for me, he surprises me with a pair of Rogue Squadrons as well.  If that isn’t a damn good friend, I’m not too sure what is. 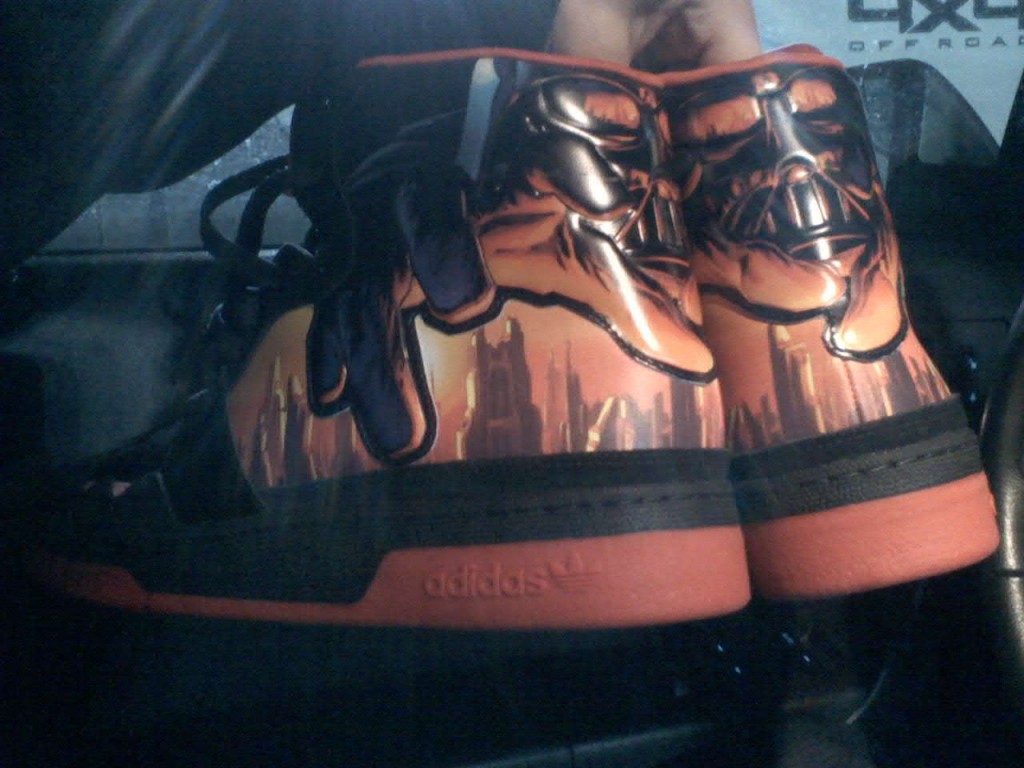 If Foxy Cleopatra is a whole lotta woman, I’m the Pittsburgh Jedi and I’m a whole lotta Star Wars.  Of course I bought them both.  Whats even more amazing is that they were the only pairs he got put on hold and they both fit me perfectly.  Clearly the force is strong with Dayka and the stars had aligned for me.  These were my Valentines Day gifts to myself, channeled through and made available by, the man of my year so far, Matt Dayka.  Add him as a friend on facebook.  He’s a badass.

Just when I though my Valentines Day affairs had come to an end, aside of wearing my new awesome Star Wars limiteds all over the place and showing them off, my sister throws me for a loop.  Both of my sisters are very intuitive and have a knack for displaying unsuspected wit in an other words, regular situation.  My eldest sister, Stacey, had gotten engaged the night before Valentines Day, if I’m not mistaken, and the following weekend we all met for brunch to celebrate the engagement.  Check out the antique ring and the rock… not too bad, huh? 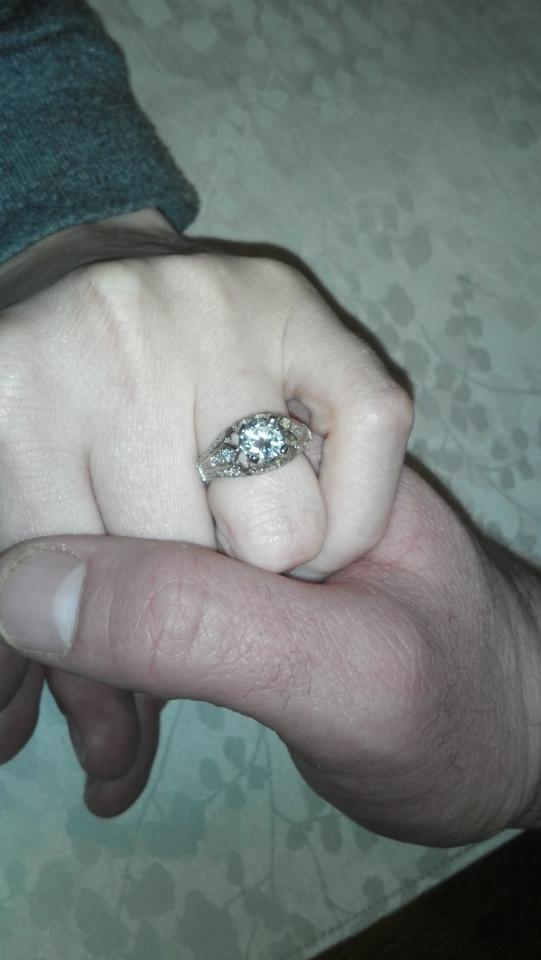 Congratulations Stacey and Kurt.  Many happy years await the both of you.

Even though my Mom picked a place that had no TV’s to watch the Pens play, I can’t really fault her much because it was during the Buffalo game, which turned out to be our worst game of the season.  Strange how that all works out.  Well Dana had her own surprises in store.  Upon my arrival, she presented my Mother and myself with these little gems… literally: 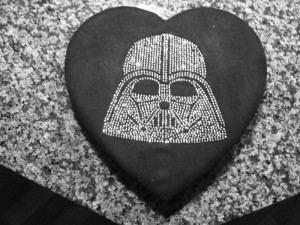 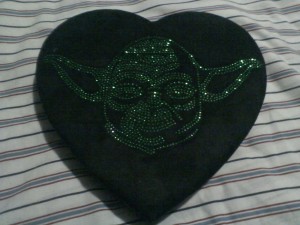 If you’re still not sure what you’re seeing here, they’re heart shaped, felt covered, Valentines Day candy boxes, bedazzled in the likeness of Darth Vader and Yoda.  Yoda went to me because, well… I’m a freakin’ Jedi.  Darth Vader went to my Mom because on my 21st birthday, my mom wore a Darth Vader mask all night, which created a birthday tradition that has continued and will probably always continue until the mask falls apart.  I’ll just buy her a proper Darth Vader helmet when that actually comes to pass.  The candy inside held some extra significance as well.  Since my Mom and I both love caramel, the boxes were full of chocolate covered, caramel hearts.  Also, to most people, the number 13 is unlucky, but for me its been my sports number for as long as I can remember and anything but unlucky.  There were 13 chocolate hearts inside each of the awesome Star Wars bedazzled, heart-shaped boxes.  Dana is on a pretty solid hot streak with gift giving lately.  If you didn’t read my story about her buying the ornaments made from the roof of the Civic Arena as Christmas gifts to the family, check it out here.

So Stacey got a ring.  My Mom and I got Star Wars Valentines Day boxes filled with candy.  On top of that, I saw Star Wars in 3-D and got 2 pairs of Adidas Star Wars limited kicks.  Honestly… I think I got the better deal.

So this was my Valentines Day Season.  If you’re the angry Valentines Day aggressive type and your blood feels a little more like battery acid right now, lay off.  It’s March now.  I’m in the safe zone.  SAFE ZONE.