Spider-Man Is Awesome. Period. – 4 Minute Preview of The Amazing Spider-Man

YET ANOTHER New The Dark Knight Rises Trailer: Fans More Like Two Face’s Face and NOT His Coin 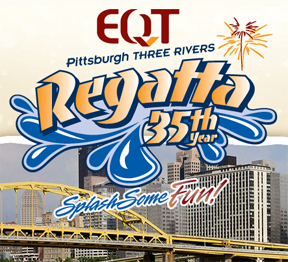 For as long as I can remember, back in the days when I was just a little padawan learner, my parents always took me down to “The Regatta”.  I don’t know how official the slogan is, but I was always clued in that “The Regatta” was coming up when I would here the widely accepted phrase and slogan, “ya gotta Regatta”.  Without ever really knowing or understanding what it really was or why it happened, I was always ecstatic to hear about it.  The phrase “The Regatta” translated to my young mind as, “I get to see and do a ton of really fun stuff all day long… possibly for multiple days!”  Now that I’m a full grown Jedi and no longer require a my  parents to cart me around, I still go to “The Regatta” ever year… and most of the time, I meet up with my family since that’s the way I best know how to experience it.

Probably best known for its closing ceremonies fireworks display, the EQT Pittsburgh Three Rivers Regatta is far from just that.  If you’ve yet to experience it, go check it out for yourself Saturday June 30 – Wednesday July 4, 2012.  Me being who I am, you can throw all the boat races/river attractions, food, shopping, laser shows, fire works etc. at me, but nothing will ever excite me more than getting to hear some good live music.  My dad was always appreciated that about me in my younger years because it’s right up his alley too and it gave him an excuse to break off with me and not have my mom drag him around all day.  As is tradition, I’ll be at “The Regatta” again this year and if you’re looking for me, you’ll find me in where the music is.

“Who’s playing this year???” you ask… let me enlighten you. Listen up…

Every year there is always a healthy spread of local and national music to enjoy.  This year, the EQT Pittsburgh Three Rivers Regatta, once again, comes legit with a solid list of artists playing down at Point State Park and closing the entire show on the Rivers Casino Amphitheatre stage.  Being a guy who grew up working with and playing in local bands, I’m going to let my bias run wild and mainly focus on my local brethren.

If you’re into deep, male fronted vocals in your country music, The Kiger Band will definitely not disappoint.  These regionally touring country boys have the attitude of rock stars and the talent to match.  If you visit their facebook page, they’re as grateful and thankful as a band could be for all the support they get.  Show them a little love on Sunday, July 1, 12:45 PM on the Point State Park Main Stage.

If you’ve been around the Pittsburgh local rock scene for a while, The Delaneys might be a name you’re very familiar with.  Personally, I can’t begin to count how many times I’ve had the chance to watch these guys play, be it at a festival, club, or acoustically in a bar around town.  With their third studio record out, The Delaneys are out touring on new material looking to tip the scale of their career in a big way.  Check them out on Monday, July 2, at Noon on the Point State Park Main Stage.

Another country artist and Pittsburgh native, Jamie Bruno is probably one of the most spirited female country performers around that you can find.  With her talent and stage presence, Jamie has been able to play along side a long list of Country Greats.  With her sights on moving to the next level, Jamie is currently recording her first, full-length album in the the city where music breeds music, Nashville Tennessee.  If she sounds like someone you might be interested in seeing, you’ll have two shots at it.  Jamie Bruno will be playing on Monday, July 2, at 2:45 PM AND Tuesday, July 3, at 2:50 PM on the Point State Park Main Stage.

If you’re looking for a local mashup of sounds from bands like The Juliana Theory, Mae, Copeland, As Tall As Lions, and just about any band under the pop punk umbrella, you get Music From Another Room.  This regionally touring local indie pop-rock group recently released their new album “Departures” in April and has a pretty active show calendar this summer.  Their sound is pretty cross-generationally pleasing to the ear.  Parents and kids alike should be able to enjoy what these guys have to offer.  Inside a city that is riddled with rock bands of all talent and success levels, Music From Another Room is certainly on the higher end of that scale.  Scope out one or both of their sets on Tuesday, July 3, at 4:30 PM and/or Wednesday, July 4, at Noon on the Point State Park Main Stage.

If Bishop Clay sounds familiar to you, you might attribute them to the celebrations outside Heinz Field during last year’s Winter Classic.  Another rock local with a new album hot off the press, Bishop Clay released their album “Sideways” out into the world.  There’s a classic rock touch here in this band, so if you’re looking for something with a lot of driving energy but a little more of a classic, throwback type feel.,. these are your guys.  Arena rock is far from dead in our generation.  Check out Bishop Clay live on Sunday, July 1, at 2 PM and Wednesday, July 4, at 6 PM on the Point State Park Main Stage.

Not to make light of the rest of the band list, but they pretty much speak for themselves:

Ernie Fields – Originally Writer & Performer of the hit “Some kind of wonderful”: Monday, July 2, at 8 PM on the Point State Park Main Stage.

America – best known for their signature song “A Horse With No Name.”: Wednesday July 4, at 8 PM on the Rivers Casino Amphitheatre.

So there you have it.  If you can’t find something in there that you don’t enjoy, you’re most likely not a real person and should go get yourself checked out.  There’s plenty here for everyone and tons of music that the entire family can enjoy.  Get on down to the 2012 EQT Pittsburgh Three Rivers Regatta and come find the Pittsburgh Jedi.  I’ll definitely be walking around and taking in the atmosphere.

Check out the 2012 EQT Pittsburgh Three Rivers Regatta’s offical website and facebook page for the full rundown of festivities and new updates and activities.

See yinz out there!